Illegal Coordination Rules Are Back In Effect for Beta

Illegal Coordination Rules Are Back In Effect for Beta

Awhile back, we suspended rules VI and VII of the decalogue for Beta server to see how it would affect things as it is the hardest part to enforce. We have decided to reinstate it after seeing the detrimental effects suspending it caused. For those who may have forgotten what those rules are, they are being posted below.

VII.
THOU SHALT NOT REVEAL IN-GAME INFORMATION
Don’t spoil the game by public posting of information from within the game that only attacking and defending mages can know about. It is not allowed to reveal the troop types and tactics of enemy mages to other players in general. Players can only share such information with registered allies on that server (Rule VI), using in-game messages or closed parts of the guild forum.• Players that want to post fragments of battle reports on the forum or in their mage description should blank out the name and number of the enemy mage and of any allied mages involved.• Players are not allowed to reveal information on possible Armageddon casters.
~DragonGrl
Head Admin
Leader of EDGE on Blitz
Ex-Leader of LoTR and KoD
Ex-Member of CoT, TC, Tribe, and KoD 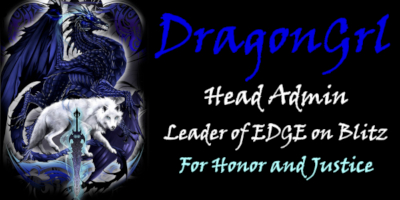